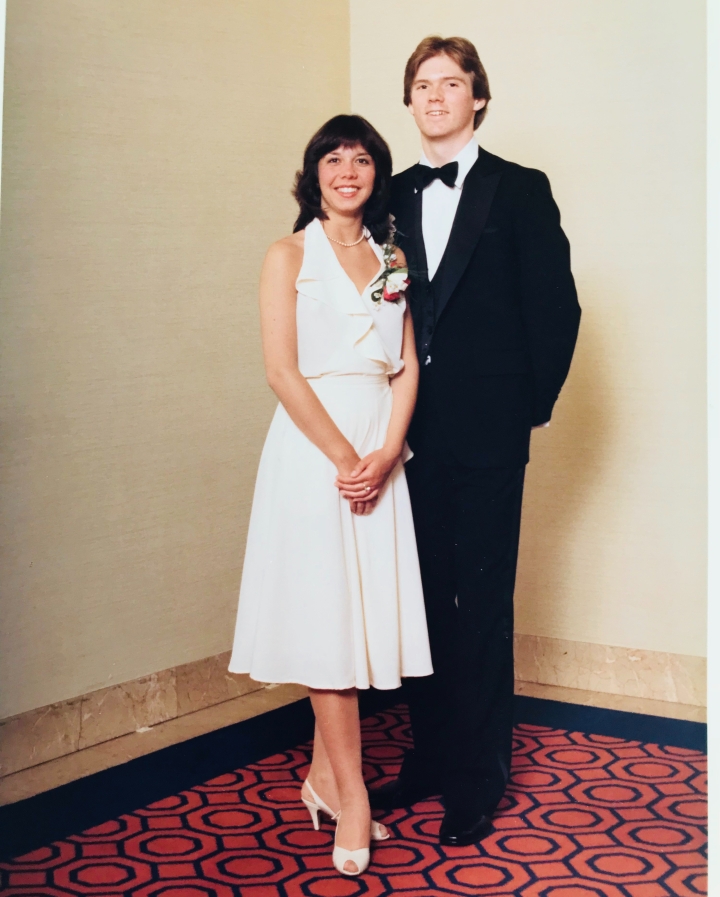 Graduation conjures up many great memories for me, that coming from a girl who wasn’t even planning to attend her own.   I thought of going many times, but I was dating  “adventure guy,” he was three years older than myself, so the idea of going to grad without him felt weird. Call me crazy, right?  In the end, a friend of mine had taken ill and asked if I would go in her place.  Gotta help a friend out, right?  I had one week to find a dress…I must have tried on dozens of frocks. Finally, my solution was a pattern and some fabric. Thankfully,  my mom, who is quite the accomplished seamstress,  whipped up a charming dress in a matter of days, so all was good! Extremely happy with myself, I needed a few accessories and Cinderella was ready for the Ball.

The evening went better than I had anticipated. Actually, I had a moment, thinking, I wished I had spent more time with my peers and enjoyed my high school life and spent less time being someone’s girlfriend.  Shaking my head…there was so much happening around me, I was oblivious, it’s as if high school passed me by and I was trying to catch up in one evening.

In Cinderella-style, midnight approached, and our entire graduating class dispersed and crammed themselves into their limos and drove to Prospect Point (a lookout point from Stanley Park).  It was a mosh of mingling teenagers along with another graduating class from a West Vancouver high school, there must have been 900 people or more, it was crazy and exciting.  Standing alone, a “boy” (from the other school) approached me and asked “how are you?” and was I glad to be finished with school?  I said, “of course!” We chatted for a long while, talking as if we had known each other forever…nice guy, I wish I could remember his name, Mike? Mikey? He was very excited about his future and that night.  We parted as new friends, with him saying, “nice to meet you, have a GREAT life!” I’m sure he had no idea how his words would impact me, we were new friends but someone I would never see again.  He was so enthusiastic and genuine that I haven’t forgotten that moment since then.  It was the highlight of my night…words from a stranger, I can’t explain the connection, and perhaps it was all in my head, emotions running high, or too much champagne but I remember so vividly and with importance.

Fast forward to now…my younger son will be graduating from high school in a few weeks, I’m both happy and sad, these are exciting times for sure.  He was recently nominated by his peers as valedictorian, I was over the moon excited for him.  Naturally, he downplayed it, telling me that there weren’t many kids even in the running. Regardless, this is a huge privilege, I’m not sure it has resonated with him yet. How will he address his graduating class, and what will his words of wisdom be?  Will he speak of the fun times they had and how science was tough and math sucks?  How F Scott Fitzgerald was not his favourite and that he actually enjoyed Shakespear?  Or, the NewZealand Ruby tour and the great season they’ve had.  So many years to reminisce about, with friendships being the focus, there would be no memories or laughs or stories, without them. Whatever his theme, I know he will be on point and reflect in his own way, (even though I’m dying to help him).

I often think about my chance meeting with a stranger on Grad night and his kind words.  I would love to know who he was and tell him, it’s been a GREAT life!

One thought on “Graduation”

I have so many passions ... please join
me while I learn, discover, explore and enjoy what life has to offer.
Llorea
xo

Finally, a haircut! Holy moly, who is this guy?!
Can we handle it?!
Love this pic...Savary Island before the crowds.
End of a busy weekend...
Good morning sunshine!
HAPPY 24TH BIRTHDAY NICHOLAS!